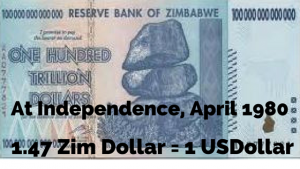 Creation of an innovative financing model that was so successful it became the only product sold for period of time; it captured close to total market share in its niche;  and it was eventually widely copied by the competition after about 9 months of successful dominance; the scheme continued for a significant period of time.

The set of economic circumstances prevailing at the time saw a rapidly increasing interest rate environment that began to negatively impact the finance industry. Due to the rising interest rates there was, naturally, a reduction in demand for finance. However, at the same time, there was a significant amount of capital equipment (particularly agricultural equipment) sitting on the showroom floors of these equipment vendors. This equipment such as tractors and harvesters, represented a significant investment and carrying cost for the dealers who were concerned of the consequences of having to hold this stock beyond the current season until the farmers’ cashflow improved in the following year.

Interest rates began to move from a number that was considered reasonable at the time, which was approximately 20% p.a., to nearly 50%. At this higher rate there was an understandable reluctance on the part of the customer to borrow. This impacted the business of the finance houses (lack of new lending business) and the agricultural equipment dealers (lack of sales).

The solution was an innovative scheme termed the “Delayed payment scheme”. This scheme was devised, implemented and managed by myself and the team looking after the agricultural portfolio. We were able to offer an effective interest rate to the borrower that was genuinely still at rates close to 20% while our competition was forced to offer credit facilities at money-market rates that were close to 50% at that time.

Of course, this scheme was wildly successful. We worked fast to ensure that all the dealers selling the equipment were included, and we needed their understanding and acceptance of some terms under which we were able to deliver this lower rate. In return, our finance company’s new lending book grew and the dealers were able to move the stock off their showroom floor. In a short space of time this scheme was extended to new vehicle sales and other dealers, and many other areas of lending and equipment finance.

Being open to completely re-think how to solve a major challenge, set a strategy that assisted the maximum number of customers, and roll this idea out to other areas of the industry was a major accomplishment. I am particularly proud of the jump we managed to get on our competitors, as even though the scheme was eventually widely copied, our market share remained and the number of valuable new clients that we were able to assist also remained with the company.